“Have you ever seen a sky so blue?” asked Ann as we were assembling for the tour of the Highland Center on Monday the sixteenth of November.  Even by Prescott’s high standards for blue skies, this one was deep blue.  The temperature, as she had promised in the GDO announcement, was inching close to the 70 degree mark.  It was a glorious day to be outside. A huge map of Arizona and its many environmental zones covered the table.

Highlands Center’s Educational Director Sarah Vincent was tracing for  Stephen the path coatimundi travel as they move from from the mountains of Mexico to  the national forests around Prescott.    Unsurprisingly, Stephen had gotten the time wrong and was there half an hour early.

As we were assembling, Leslie Allward built on the them, and we learned that the part of Arizona in which we live is world renowned for its environmental diversity. The Highland Center itself was sited to embody  that diversity with grassland, chaparral, woodland, and riparian habitats.  The topic of altitude, being a crucial component in determining characteristics of a biome arose.  Ruth Lysak cheerfully looked up the altitude of the center and establish that it stood at 5560 ft above sea level.  Sarah recommended a drive up Walker road to Senator Highway where, at a higher elevations, one would see native maples with flaming red seasonal foliage.

Once we had our bearings, Lesley introduced us to the center and advised us to pay attention to the details – things like the marvelous stamped metal screens that served as safety barriers and dividers.   The first plants we encountered out of the gate were manzanitas.  These, we learned,  are not easy to set fire to; but due to a high oil content they burn ferociously, supporting flames as much as three or four times their height.  In light of this, they should not be planted within 30 ft of a building.  Manzanita plants crave bright sunlight and they are infernally difficult to establish in a garden; you must use a soil moisture meter to get the water right.

We followed the stream bed, observing how it had been provided with boulders to calm the water flow and retain moisture.  Lesley generously lined us up for a photo in front of some ponderosa pines.  When mature, these trees can have roots that travel horizontally further than the tree is tall.  No point watering one of these things at its drip line. We paused to talk about what happens to these trees after they die.  Long ago they would be promptly  cut down by the forest service.  They are great habitat for woodpeckers and smaller birds that live in abandoned woodpecker sites.  A dead tree or snag can house dozens of birds.  These birds that feed on insects that can adversely affect trees.  So the dead trees, interestingly, can augment the health of the living ones if their legacy remains intact.  This idea is getting a lot more currency in forest practice than it used to do.

The center features an ethnobotanical area presenting  native plants that have been cultivated and used by humans.  There is a marvelous playground where young children play with sand and rocks.  Finally, the path makes a great loop, with vistas in four directions.  A southwest facing area bakes in afternoon sun and is thickly populated with manzanita.  A southeast facing area features grassland, mostly populated with side oats grama grass.  A lone Asclepius plant, a forb, promises to host a few monarchs during some future growing season.  A northeast facing area is most densely populated with ponderosa pine who do not like their feet to get too hot and dry.

At the end of the trail we sat in a ramada and ate the food we brought, sitting at great distances from each other.  Despite all the oddness that goes along with the practice of social distancing, it felt good to share  time and space with each other.  It felt especially good to share the  vision of taking care of the unique and beautiful space in the central Arizona highlands that we call home. 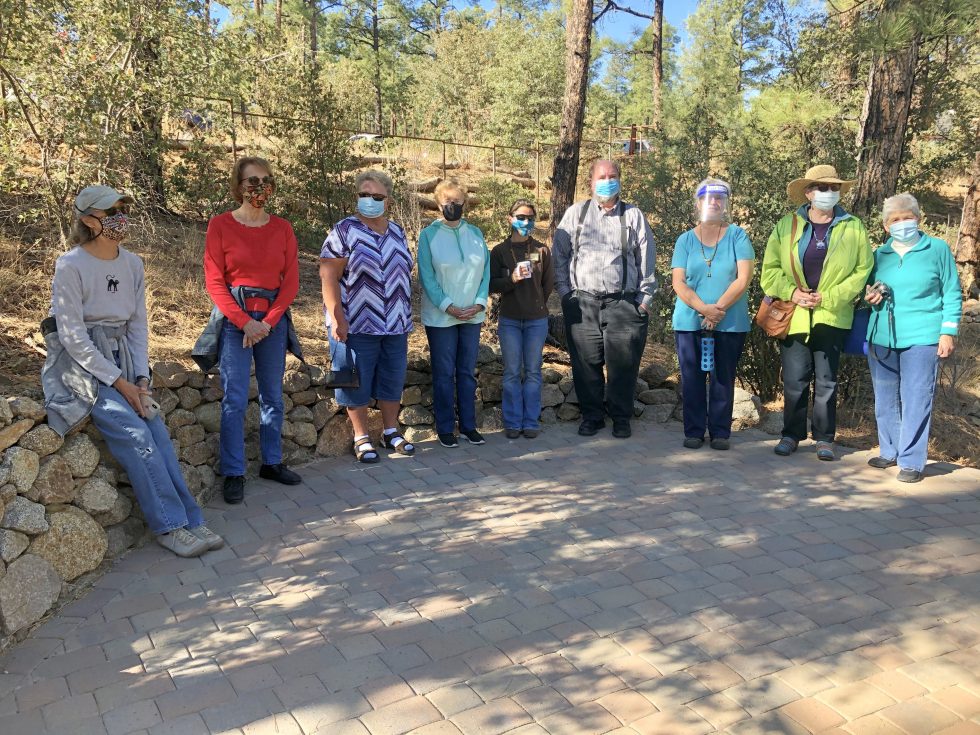